“I have never approached cooking as a technical endeavor – following recipes to the letter or strictly adhering to measurements…I learned the beauty of cooking this way from the best – my mother.  Season your food to your liking, and enjoy the process of preparing it for the people you love most…” 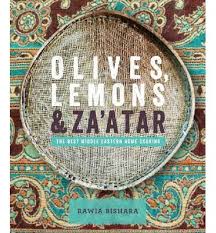 Olives, Lemons & Za’atar is one of the more inspiring cookbooks I’ve read, as it brings to pages a new and colorful world of spices, beans, and grains, full of non-technical (but soulful) expertise.

The rich bounty of the Middle Eastern Market comes to full life in a particular snapshot of Bishara’s kitchen at famed Tanoreen in Brooklyn, in which a row of spices are set to the cook’s reach much in the same way a painter’s paint might be – a pinch of this, a dash of that, color here, time for zest, more texture, etc.

I have found in my own home cooking over 20 years Bishara’s secret above, that to cook for instinct as much as prescription, is as good of an end goal in cooking as any other could be.

If, after years of cooking soup, for example, your family has provided feedback that they like lentils or vegetables still firm in soup, then you might not necessarily cook a particular recipe as long as it suggests; if, on the other hand, all the above is preferred soft, even mushy, then you can adjust accordingly.  Less cumin, more coriander, steep the lemon juice or let it skim over the top…?  The cook is always of at least two minds: how might I like the dish I am cooking; how might they like the dish I am cooking. Make it look inviting. Let bold flavors hint, not bully. In this, the simple family style recipe of Red Lentil Soup, found on the Williams Sonoma weekly recipe app. was a nice exercise for the home cook.

The recipe asks to begin with a full yellow onion, sautéed in oil.  Depending on how long the soup is to cook, I sometimes change the whole onion to half: I like plenty of onions, but do they?  Not always.  Add cumin, coriander and red pepper flakes to cook.  A pinch of each of these can be fine once all has reduced down its appropriate sauce, but too much red pepper, for example, might turn an otherwise positive grin to a secret growl.  At this point, add one cup of red lentils.  As Olives, Lemons mentions several times, lentils “after soy beans, they have the highest protein content of any vegetable and are also fiber packed.”

I wonder, as I go on to stir the pot for the next 40 minutes, if cooked lentils might not be added to many more meals as an easy way to pack-on a non meat protein? Add the broth, diced carrots, one peeled, seeded and chopped tomato, some salt along the way and the soup base is complete, now time to simmer until desired tenderness.

Along the side, I made a panini out of chopped ham, turkey and mozzarella, clumped together in a pile and spread out over a grain bread spread by a combination of mayo and a honey mustard dressing (but only enough mustard to hint).

At this point, the recipe calls for pureeing in a blender, then moving back to the pot in order to add fried shallots and then the lemon, but I skipped this part, seeing that the soup had a perfect texture just as it stood, and knowing that raw fried shallots were going to look more like a warning sign than an invitation. I added more water to the soup to loosen and added a final twist of a half lemon for pure zest.